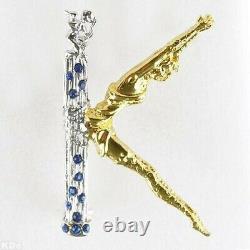 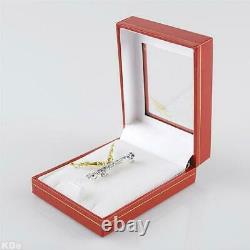 THIS IS YOUR GOLDEN OPPORTUNITY TO OWN A GENUINE ERTE ART DECO CREATION! From an original design by the "Father of Art Deco, " Erte's famous "Alphabet" series' first incarnation was a suite of serigraphs and its next was a priceless collection of figures cast in precious metals set with gemstones.

This sparkling pendant/brooch depicts the letter "K" and is crafted from solid gold-plated sterling silver and hand-set Swarovski crystals, cast from the same mold used to create the original! This piece comes in a simple and pretty gift box adorned with the Erte stamp.

Petersburg in 1892, and destined by his father for a military career, Erte confounded expectation by creating his first successful costume design at the age of five and was finally allowed to move to Paris in 1912 to pursue his passion for fashion. Erte enjoyed a long career as a fashion illustrator for Harper's Bazaar magazine, and gained fame as the creator of gloriously extravagant costumes and stage sets for the Folies Bergere in Paris, and for George White's Scandals in New York. He also designed for the opera and traditional theatre, and made a brief appearance on the Hollywood scene in 1925. Erte disappeared somewhat from the fashion scene in the years following World War Two, only to have his glamorous career re-launched in 1967 by London art dealer Eric Estorick, who was greatly impressed by Erte's vast body of work.

Effectively taking New York and London by storm, the duo also introduced a new generation of fashionistas to Erte's spectacular Art Deco creations. With demand for his work at an all time high, Erte found that while the wealthy happily paid top dollar for his original pieces, young people of limited means were clamoring for something they too could afford. This led to a decision to create multiples, first of graphics, and later, of bronzed sculptures. During the quarter century of Erte's "second career, " he achieved a level of fame which rivaled the first, if only for its wider reaching expanses.

Having entered the fashion world in his early 20's, Erte remained active well into his 90's, with numerous books published on his life's work, including two large format books, "Erte at Ninety, " and "Erte at Ninety-Five, " as well as one on sculpture, Erte Sculpture. " Upon his death in 1990, he was hailed as the undisputed "Prince of the Music Hall, " the "Mirror for Fashion for 75 years, " and "The Father of Art Deco. The item "NIB Erte Alphabet Pin Gold, Silver, Gems, Letter K- Art Deco with Gift Box" is in sale since Saturday, August 1, 2020. This item is in the category "Jewelry & Watches\Fashion Jewelry\Pins & Brooches". The seller is "1963armyvet" and is located in Frisco, Texas.

This item can be shipped to United States.