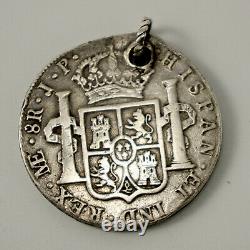 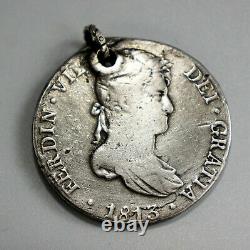 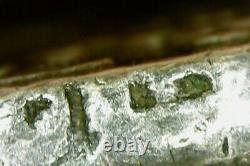 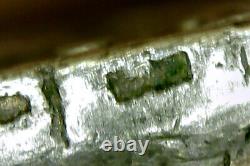 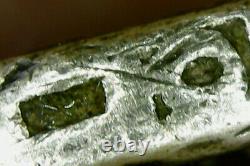 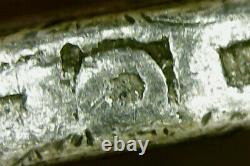 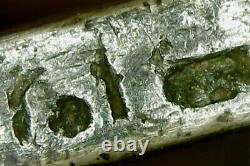 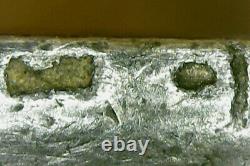 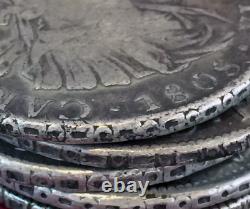 This is a real Eight-Reale coin. It will make a beautiful necklace... Because, sometimes you need a last minute present fast! No, I didn't punch the hole in it. That was probably done soon after it was minted.

Research revealed stringing coins together was a common practice, for defense against pickpockets. There is also a school of thought that the coins were attached to hand bags as a status symbol of wealth. Adding the silver interlocking jump ring was my idea.

Type: Spanish Portrait Dollar - Reale. Diameter: Approximately 39 mm The size of a U. Obverse (Front): The Portrait of King Ferdinand VII. Reverse: (Back): The Pillars of Hercules and the Arms of Leon & Castile.

Sterling silver, interlocking jump ring allows the coin to be used as a necklace. One of the worlds most storied coins is the Spanish real, which was Spains denomination at the height of the nations dominance as a world power in the 16th century. Silver eight-real coins were worth one Spanish dollar, and were the source of the phrase pieces of eight, which has been associated with pirates and ill-gotten treasure since 1883, when Robert Louis Stevenson put the phrase in the mouth of Long John Silvers talkative parrot. The silver real (Spanish: real de plata) was the currency of the Spanish colonies in America and the Philippines. The coins circulated throughout Spain's colonies and beyond, with the eight-real piece, known in English as the Spanish dollar, becoming an international standard and spawning, among other currencies, the United States dollar.

King Ferdinand VII ruled Spain between 1808 and 1821. They could only fit "Ferdin" on the coin. In 1732 a new design began in Mexico. And with it a new concept: milled, or machine-struck coinage.

Each milled coin was to have fully readable details on round planchets with embellished edges that could not be cut away without detection. You can see these in the close up photos. The last photo is just an example of how planchets look on other coins.

BEWARE FAKE COINS Fake Reals have vertical ridges, or reeding, around the edge, just like a modern-day quarter. Also, if you flip a real Reale (vertically) the opposite side will appear upside down. Seems like a stupid mistake for the counterfeiters to make.

Anyway, no matter how you wear this coin on a necklace, on your ear, on your handbag, or (shakes his head) a charm bracelet you'll get attention and a conversation started. Having read all this, you will be a great conversationalist! The item "1813 Spanish 8-Reale Coin Pieces of Eight Unusual Gift or Pirate Earing" is in sale since Sunday, August 30, 2020. This item is in the category "Jewelry & Watches\Fashion Jewelry\Necklaces & Pendants". The seller is "exalon" and is located in Oldwick, New Jersey. This item can be shipped to United States.